1973: UNRAVELLING THE MYSTERY HOW THE 'COMMONWEALTH OF AUSTRALIA' BECAME 'AUSTRALIA'

Over the past few years, some of you may have come across research, conversation and debate about the apparent re-branding of the Commonwealth of Australia to the simpler Australia, apparently in 1973.

Given that this conversation is largely engaged in by Constitutionalists, and common law researchers, other elements such as Queen of Australia, Great Seals, the corporatisation of Australia, the bankruptcy and takeover of Australia by the U.S becomes part of the conversation, which usually aims it's scope toward Gough Whitlam as the destroyer of the much-fabled 'Australian way of life'.

So, now is the time to illustrate the intriguing tale of how a country changes its name.
On June 19, 1973, the Acts Interpretation Act 1973 was assented to by the Governor-General, Sir Paul Hasluck. Hasluck was a former Liberal parliamentarian who was appointed Governor-General in April 1969 by the soon to be concluded, McMahon Liberal government.

This act made two significant changes.

1.  S.4 (1) amended the Acts Interpretation Act 1901-66 by deleting paragraphs (a) & (b) and replacing those paragraphs with "a provision declaring that the term 'Australia' or the term 'The Commonwealth' should mean the 'Commonwealth of Australia.'" 1. 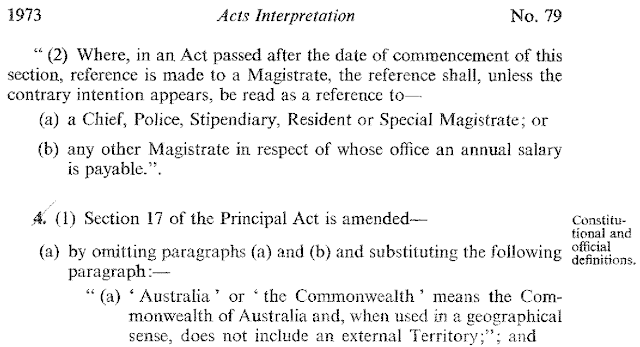 Please note that this excerpt does not state that the Commonwealth of Australia means either 'Australia' or the 'Commonwealth'. That type of re-definition would be an attempt to alter the Constitution outside of the referendum process.

2. Additionally, S.4 (2) amended the definition of the term "The Gazette" whereby the 'Commonwealth of Australia Gazette' was changed to the 'Australian Government Gazette'.

Now. In the realm of jurisprudence, you may argue that the original grant of power given to parliament, by the English parliament, to make laws meant always using the referendum process, as opposed to their practice of making statutory law.
If this is the case, and parliament only held a remit to make law via the referendum process, then, every piece of statutory legislation is invalid.
If, however, if the Constitution does confer on parliament the ability to make statutory law, then all of the statutory changes are completely 100% valid.

The most compelling evidence that this is the correct interpretation of the two situations is that parliament has followed this statutory law creation process since 1901 with full knowledge of the English parliament and their subordinates, the English royal family.

It is reasonable to presume that if the franchise head office in England was not happy with the way one local franchise was creating its internal laws that it would intervene and change it.

It is worth noting, that these changes, at least officially, have nothing to do with incorporation or bankruptcy, if you take the evidence that exists from the time, namely, the Commonwealth Parliamentary Debates that tells us that;

There is no law or no logical reason for the Australian Government to change it's name in the aforementioned manner in order to incorporate or be taken over by America as a bankrupt entity.