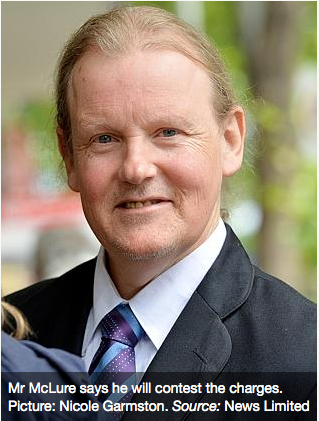 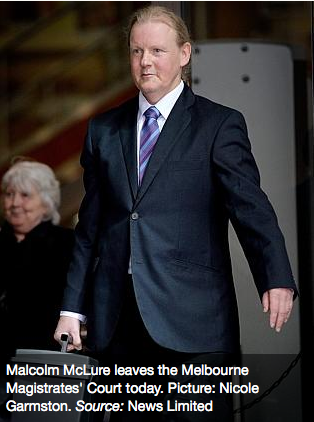 
Malcolm McLure is facing a charge of engaging in legal practice without being qualified to do so, over advice he allegedly gave to Mr Jane during a public spat with his son, Rodney.

Representing himself on Tuesday, Mr McLure told Melbourne Magistrates' Court he planned to contest the charges, and sought an adjournment to prepare his case.

The court heard Mr McLure, who had a number of supporters in court with him, was served with a brief of evidence just minutes before today's hearing.

A lawyer for the Victorian Legal Services Commissioner told the court in July that Mr McLure had refused personal service of the brief of evidence, and a summons had been sent to three known addresses and an email address.

On that occasion a warrant for Mr McLure's arrest was issued.

Prosecutors allege Mr McLure prepared documents for Mr Jane and provided him with legal advice for a Federal Court stoush with his son in 2011.

Rodney Jane, who now controls the Bob Jane T-Marts, took his father to the Federal Court to prevent the Bob Jane trademark from being used in a rival tyre business.

A default judgment was made against Bob Jane after he failed to appear in court, but it was overturned last year after a judge found Mr McLure had provided Mr Jane with damaging legal advice.

Overturning the judgment, Justice Anthony North described Mr McLure as "an incompetent, ignorant charlatan"' who had Mr Jane "under his spell".

He described Mr McLure as a "menace"' who "shook the voodoo chain", and said he had unconscionably brought down Mr Jane and his business partner, Denis Rigon, by giving legal advice when he was not entitled to do so.

Justice North said Mr McLure ``demonstrated a complete lack of understanding, only matched by his incompetence", and had a fiendish hold over Mr Jane.

In an affidavit before Justice North, Mr McLure said he'd an interest in medicine, law and religion, but never claimed to be a solicitor.

Mr McLure told magistrate Jack Vandersteen he wanted a trial by jury and said his case could involve constitutional considerations.

"It's held by the people that it's the right of people to help each other," he said.

Mr Vandersteen said while a trial by jury was not possible for the summary charge it would be a matter for another magistrate when the matter returned to court next year.

It is not yet known whether the Legal Services Commissioner will seek a jail term if Mr McLure were to be found guilty of the charge, which carries a maximum penalty of two years' imprisonment.

Posted by Tetractys Merkaba at 1:36 PM