In a photo posted to Facebook by the Sherriff's Department of Nevada's Humboldt County, deputy Lee Dove poses with a police dog and $50,000 in cash he took from a driver during a traffic stop. The driver, Tan Nguyen, was never charged with a crime; he claims that he won the money gambling and didn't consent to a search.

On Friday, the district attorney's office in Humboldt County, Nevada, agreed to return the $50,000 that had been seized from Tan Nguyen during a traffic stop on September 23, 2013. Nguyen had never been charged with a crime, much less convicted of anything—Humboldt County sheriff’s deputy Lee Dove pulled him over for allegedly going three miles over the speed limit, then searched his car without permission (though the cops claim consent was given) and found what Nguyen said was gambling winnings. The 37-year-old California resident’s luck clearly ran out when he was stopped by Dove, however, and according to his lawsuit, Nguyen was given a choice—give up his money or try to get home without his vehicle.

This wasn't an isolated incident or a mistake on behalf of the cops. In a photo that the Humboldt County Sheriff’s Department put on Facebook (and has since deleted), Dove posed proudly with a police dog and the $50,000 he had seized. The officer, who is also accused of taking $13,800 and a handgun from another driver in a similarly flimsy traffic-stop scenario, is presumably feeling less puffed-up now. On Friday, the local district attorney’s office promised that that driver, Nguyen, and another person who had $2,400 taken, would get their cash back, and that forfeiture policy would be reevaluated.

Is it good that the DA is checking on these stories? Sure. Are these Nevada horror stories particularly surprising? Not if you know the bizarre state of asset-forfeiture laws.

Civil asset-forfeiture laws vary, but like many other bad laws they’re generally used to take money and property from individuals suspected of drug crimes. According to Nick Sibilla of the Institute for Justice (whom I briefly worked with at Reason magazine), 37 states mandate that the property owner prove that his or her property is innocent of any criminal ties in order to get it back. The Institute for Justice, a libertarian-leaning law firm that has often fought asset-forfeiture abuse, rates Nevada’s law a D+—under the state's current rules, police departments get to keep 100 percent of the profits from sales of seized property, and cops need only show “clear and convincing evidence” of that property’s connection to a crime. That’s “a higher standard than many states,” according to the Institute for Justice, “but still lower than the criminal standard of beyond a reasonable doubt. But the burden falls on you to prove that you are an innocent owner by showing that the act giving rise to the forfeiture was done without your knowledge, consent, or willful blindness.”

Often cash—usually anything over $10,000—is deemed by the cops suspicious and inherently tied to drug trafficking. That makes it tough for people, like high-stakes gamblers, who tend to have a bunch of bills lying around. Worse still, forfeiture incentivizes departments to continue the failed war on drugs, as large chunks of the profits from seized assets go back to local cops. Sibilla notes that seizures by sheriff’s departments in other states have been in the millions—including a whopping $20 million taken in two decades by Sheriff Bill Smith in Camden County, Georgia.

These Nevada cases—though they ended happily thanks to lawsuits and bad publicity for the cops involved—reek of theft and intimidation on the part of the police. But sadly, they’re not unique. The good news is that, if the drug war ends, asset forfeiture may suffer as well. We just need to hurry up.
Now on to the rest of this week’s bad cops:

–On March 11, a stretch of highway near Rockville, Maryland, was shut down for 30 minutes so local police could capture three armed bank robbers. We're not trying to encourage bank robberies, or to suggest that bank robbers should be allowed to go about their business, but it sure seems like the police were using excessively aggressive tactics in response to a relatively minor crime. (No one had been killed; this wasn’t a terrorist attack.) This operation included a roadblock and officers who “walked from car to car with pistols, shotguns, and semiautomatic rifles drawn,” according to the Washington Post. Police also barked orders at drivers and demanded to search their cars.

–A 20-year-old member of the US Air Force was shot by Alabama police on March 6 after he was in a car accident, and his family is baffled about how that could have happened. On the night in question, Michael Davidson, an airman first class, clipped another driver’s car and stopped to exchange insurance information. According to Davidson and his family, before he could even get to the other car, the police appeared; Davidson held up his hands to make sure nothing awful happened. When he turned around, wallet in hand, hands in the air, officer Phillip Hancock, of the Opelika police, shot Davidson in the stomach. The young man’s family said that the cops at the scene were screaming questions about where another person was, adding to the confusion, but Davidson had been driving alone. Police say they quickly called emergency services, but Davidson and his family claim that the airman was kept cuffed and bleeding on the ground while police searched his car.

(Davidson's memory is hazy, since he passed out.) His father says the family wasn’t told about his son being shot until noon the next day, and that Davidson almost died during his surgery. Police have yet to explain why Davidson was shot except that the officer thought he was in danger—perhaps from the now permanently injured 20-year-old’s wallet.

–On March 6, ten San Diego police officers swarmed into a strip club with guns and bulletproof vests. They proceeded to photograph the exotic dancers without letting them get dressed and shut down the club for several hours while confusing and intimidating the club’s staff and manager, who thought maybe police were looking for “a bank robber or serial killer.” Nope, it was a basic random compliance check to make sure each worker was who she said she was and that the club had the proper licenses in place. It’s unclear why this took a team of heavily armed cops.

–Two Brooklyn men recently filed a lawsuit in federal court alleging that some NYPD cops arrested them after they refused to give their White Castle hamburgers to the officers. On October 31, 2013, Danny Maisonet and Kenneth Glover were carrying their famously greasy treats home during the aftermath of Hurricane Sandy when they ran into some cops who straight-up demanded their food. According to their suit, when they declined to hand over the burgers, they were hit with flashlights, handcuffed, and taken into custody. Officer Angelo Pizzarro says the men were blocking the sidewalk while he and his colleagues were attempting to arrest looters—but charges of disorderly conduct and obstructing government administration against Maisonet and Glover were later dropped.

–A suit filed earlier this month in Philadelphia district court alleged that Philly police Tasered a 76-year-old man half a dozen times in August 2012 after mistaking the man for his brother, who had just been causing a scene in a salon. The cops threw Robert Gross to the ground and cuffed him, then jerked him to his feet. When the old man asked what was going on, they Tasered him six times. The police don’t dispute their treatment of Gross, and they charged him with resisting arrest and disorderly conduct, the latter of which stuck. At Gross’s trial, cops argued that he had been belligerent and had tried to punch the arresting officers. Gross, who argues that the cops thought he was his brother Carl, is alleging that his 14th and Fourth Amendment rights were violated and that the officers committed assault and battery. Meanwhile, Carl Gross—who had caused the scene in the salon—was put into a home for dementia sufferers soon after the incident. Sounds like he wouldn’t have warranted six hits from a Taser either.

–Yes, Baltimore cop Jon Boyer is “hunky,” but we’re not going to focus on his ripped bod or dreamy eyes or whatnot—he saved a stray kitten from the streets, adopted it himself, then posed for an anti–animal abuse organization’s ad. Even if he looked like Mark E. Smith he’d be a worthy Good Cop of the Week. Keep rescuing those kitties, Jon!

Lucy Steigerwald is a freelance writer and photographer. Read her blog here and follow her on Twitter. 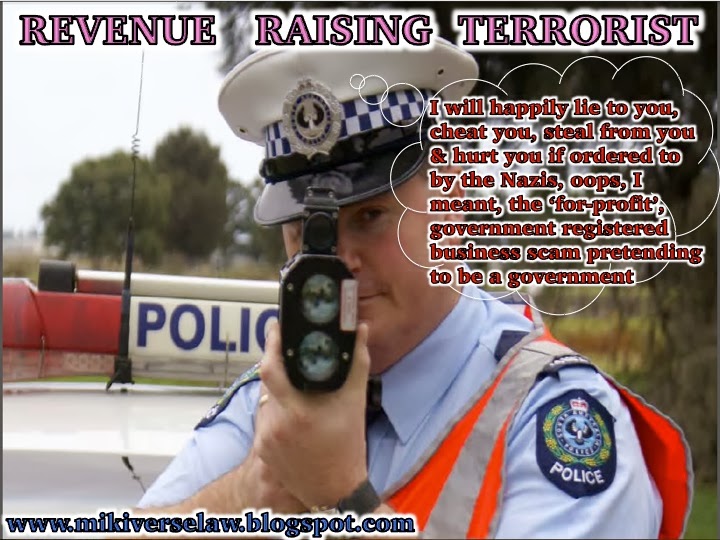 Posted by Tetractys Merkaba at 4:39 PM