CHIEF Commissioner Ken Lay wants every speed camera to get new technology so they automatically fine the driver of every unregistered car that passes them.

The futuristic plan could boost Government coffers by hundreds of millions of dollars.
Nothing but a revenue raising device.

Victorians driving cars illegally have paid almost $150 million in fines in the past five years — and that’s without the much more efficient camera technology –so much for any journalistic objectivity– being proposed by Mr Lay.

He is in favour of all red light and fixed and mobile speed cameras being fitted with automatic numberplate recognition (ANPR) technology.

Mr Lay wants to open debate in the community about the proposal as he believes it would save lives. How?


“It is about using technology smarter –and this is a very good example of efficient and cost effective law enforcement,” he told the Herald Sun on Wednesday.

Under the proposal, the number plates of all unregistered vehicles — and vehicles whose registered owner is disqualified from driving — would be programmed into every traffic camera.
It only applies to those that are subject to the racist laws of the military occupation that began in 1788.

Those vehicles would be instantly detected and snapped every time they passed a traffic camera, whether they are speeding or not.

The radical move to convert every traffic camera to double as an ANPR is part of Mr Lay’s ambitious Blue Paper for the future of Victoria Police, which was released this week.

Mr Lay said it made “absolute sense” to use speed cameras to also nab disqualified drivers and drivers of unregistered cars.

“They would work in the same way as any other traffic camera,” he said.

“You would just get a penalty notice three weeks down the track for driving an unregistered car.

“It is an efficient way of doing it; you don’t have to have police members present.

“To get the same bang for your buck –business decision, NOTHING TO DO WITH SAFETY, DON'T BE FOOLED–you would need many, many, many police members out there pulling cars up and checking for registration.

“It would save lives and make our roads safer.”
Funny how these lies are never questioned by the corporate media.

More than one in eight fatal accidents involves an unlicensed driver or an unregistered car.

Mr Lay said the technology already existed to convert speed and red light cameras to also have an ANPR function and he wants the community to debate whether it should happen in Victoria.

“It’s just another way of actually enforcing the law,” he said.

“These people that are unlicensed or driving unregistered cars are the ones that are hurting people on the roads.”
It is a shame that some people will believe Ken Lay's lie.

The Herald Sun on Wednesday revealed a host of radical reforms Mr Lay’s Blue Paper has recommended to revolutionise the force, make better use of its resources and fix its problems. 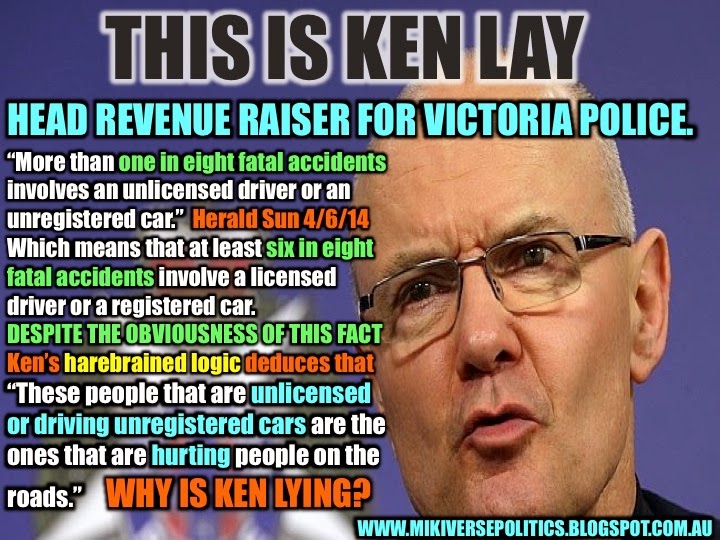 Posted by Tetractys Merkaba at 6:37 AM