Perhaps the most important victory for all car enthusiasts and anyone that has had to suffer from fixed or mobile speed cameras has come today, from no other than Victoria Police.

A recent survey by the Herald Sun has found that more than 70 per cent of Victorian police believe speed and red light cameras are more about revenue-raising than preserving road safety.

A point we have tried so very hard to get across.

Out of the 3459 police officers questioned, only 6 per cent (207) strongly agreed speed cameras really do help save lives.

Most interestingly though, the main duty of police officers – to serve and protect – is not shared by 42 per cent of the force, who strongly believe making money for the Government is their main role!


“If the cameras are doing their job, then we spend less time at serious collisions and fatalities, members might want to come and spend a day with us to see the impact of speed.” he said.

In Victoria alone, an average of more than 50,000 mobile speed camera fines are issued each month and that figure excludes tickets issued by fixed cameras.

Victoria Police were quick to point out that regardless of what the Police force believe, excessive speed is still the most common cause of road accidents.

A spokeswoman for the force noted that there has been a 50 per cent drop in the road toll since the inception of cameras in 1989.

Unfortunately, nor her or the Victorian police force has considered the enormous advancements in vehicle safety since 1989.

The inclusion of airbags in nearly all new cars, ESP, ABS, Side airbags, the list goes on, but, according to Victoria Police, the 50% reduction is primarily due to speed cameras…


“The traffic camera program is ultimately designed to reduce the number of vehicle collisions and therefore the incidence of road trauma and death,” she said.

Now that the police officers agree with the majority of us, how can we move forward from here? 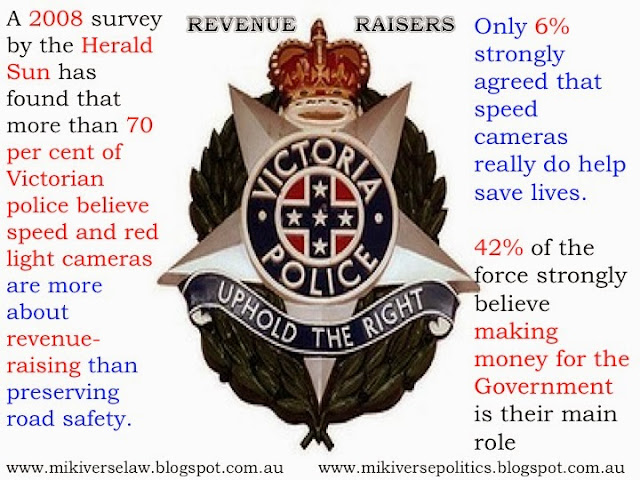 Posted by Tetractys Merkaba at 12:00 AM