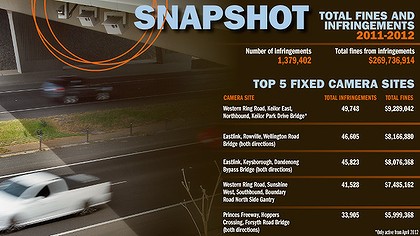 Deborah Gough Published: February 25, 2013
Up to 40,000 speeding motorists have got off without paying for their fines because there are too few public servants to cope with the review process, the public sector union has said.
Under the Infringement Act, a person can apply for a review of their speeding fine. If the review is not dealt with within 45 days it must be withdrawn by the Traffic Camera Office.
The ABC reported that the camera office was forced to withdraw up to 40,000 speeding fines because it could not keep pace with the appeals.
The Community and Public Sector Union state secretary Karen Batt said cuts to public servants and a freeze on hiring had led to a leap in motorists getting off without paying their fine. Ms Batt said police officers had been used to make up the shortfalls for trained support staff since December last year.
Ms Batt said she held documents that showed the Justice Department had started using labour hire firm Tenix to fill the gaps in the Victoria Police’s traffic review and prosecutions section last week. Tenix would provide labour hire staff until at least June, she said.
Earlier this year, it was reported that there were too few staff to process paperwork that allows police to crush hoon cars and that hoons were getting their cars back.
Ms Batt said up to 12 per cent of Victoria Police's support staff had been cut and labour hire firms were used to make up the shortfall. The Baillieu Government has cut 4200 public sector jobs.
Ms Batt told ABC 774 the cuts were counter-productive because the state lost revenue and was spending money on labour hire firms instead.
"We believe that the budget cuts are a great expense to the state's budget," Ms Batt said.
"We have been getting a lot of anecdotal evidence from across Victoria Police about the impact that these cuts are having. You can't cut support staff without it having a direct impact on the frontline," she said.
The union has put its case against the use of labour hire firms to a Senate inquiry.
"The use of labour hire in the public service is undermining both the integrity of the public service and the ability to deliver services to the people of Victoria," she said.
She said labour hire contractors did not have the same ethics training as ‘‘officers of the Crown’’ and were not subject to freedom of information laws in the same way as public servant staff.
Deputy Premier and Police Minister Peter Ryan would not elaborate only saying that it was "not my understanding".
"I will have the matter investigated and we will have more to say about it in a timely way," he said.

This story was found at: http://www.theage.com.au/drive/motor-news/drivers-avoiding-fines-due-to-staff-cuts-20130225-2f0rd.html
ETHICAL DONATORS AND COMMUNITY MEMBERS REQUIRED, TO FILL THIS SPACE WITH YOUR POLITICAL SLOGANS, ADVERTISING OFFERS, WEBSITE DETAILS, CHARITY REQUESTS, LECTURE OPPORTUNITIES, EDUCATIONAL WORKSHOPS, SPIRITUAL AND/OR HEALTH ENLIGHTENMENT COURSES. AS AN IMPORTANT MEMBER OF THE GLOBAL INDEPENDENT MEDIA COMMUNITY, MIKIVERSE POLITICS HONOURABLY REQUESTS YOUR HELP TO KEEP YOUR NEWS, DIVERSE,AND FREE OF CORPORATE, GOVERNMENT SPIN AND CONTROL. FOR MORE INFO ON HOW YOU MAY ASSIST, PLEASE CONTACT:themikiverse@gmail.com
Posted by Tetractys Merkaba at 12:40 AM