The momentum of the One People’s Public Trust is undoubtedly escalating. And fast! As our new social framework begins to manifest, the positive energy it is creating around the world is palpable.
And it is no surprise. The old game is over! A new social model has been enacted. And the global community is embracing it with vigour. We are digesting life-changing information at a rate of knots, and starting to re-claim our rights from our former masters.
By design, the OPPT provides a lawful framework through which a new social energy can be expressed. Its foundations are aligned to the true essence of our Being, and as a result we are forming new and creative bonds. We’re sharing information, ideas, hopes, love and encouragement… even with total “strangers”.
This new social model – compelled by such a positive, unified energy – can only be wild and wonderful… and I believe it will be wildly successful.
Understandably, there has been a great many questions raised since our first article was published. First steps are being taken, the old structure is being challenged and implications are crystallizing in our minds…. and there are some common themes emerging. Here I will address the most common questions our readers are asking.

The UCC is the Prime Commercial Registry on the planet. Its international, national and state portals, branches and franchises under the UCC-preserved “Agent to Principle is Principle to Agent” doctrine are all uniform. Notice by public registration entered via any one of the system’s portals is deemed as notice to the entire system. Basically, if you enter one portal you enter the whole system.
Washington DC is an international portal for UCC filings, therefore “any and all domestic and international equivalents” (as specified in the preamble) covers all the corporations linked to the UCC… which is ultimately all corporations world-wide when the interlinking of ownerships centred around the Bank of International Settlements (BIS) are taken into account.
If you read the following excerpts you will see the lodgement location is Washington DC. You can also start to see how the filings cross-reference many of the previous filings and pulls them into this one document “as if set forth here in full”. This example demonstrates the interlinked nature of UCC filings. It also shows the language that links in the whole corporate system into this filing. 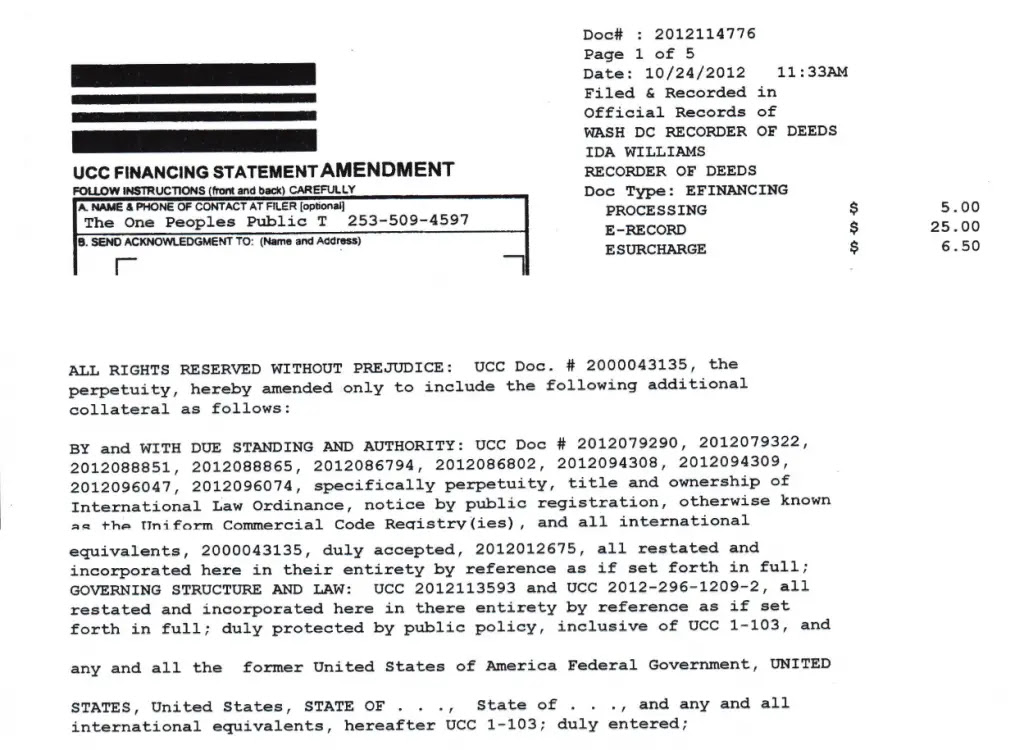 This excerpt clearly shows how the BIS is named, then its underlying network structure of corporations are gathered into the execution of sentence. The net is thoroughly cast over the entire corporate system.

Now, if you think that UCC is not used by corporations in other countries, think again. Let’s look at Australia for example; these are UCC filing records of UCC financing Statements registered on the Washington DC registry relate to the ANZ Bank, Commonwealth Bank, Westpac Bank and the US Federal Reserve Bank NY. Records of UCC filings by international corporations are numerous in the Washington DC Registry.
Source:  https://gov.propertyinfo.com/DC-Washington 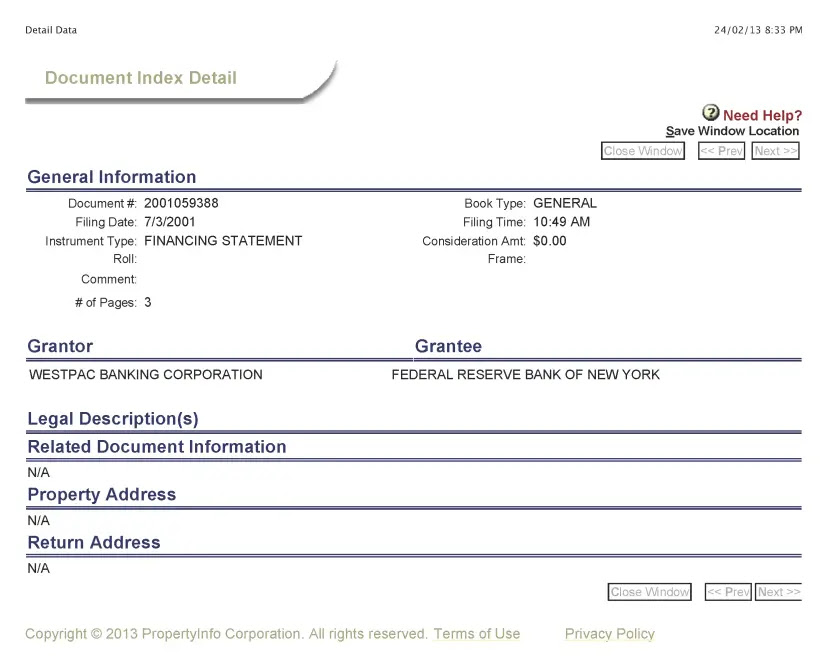 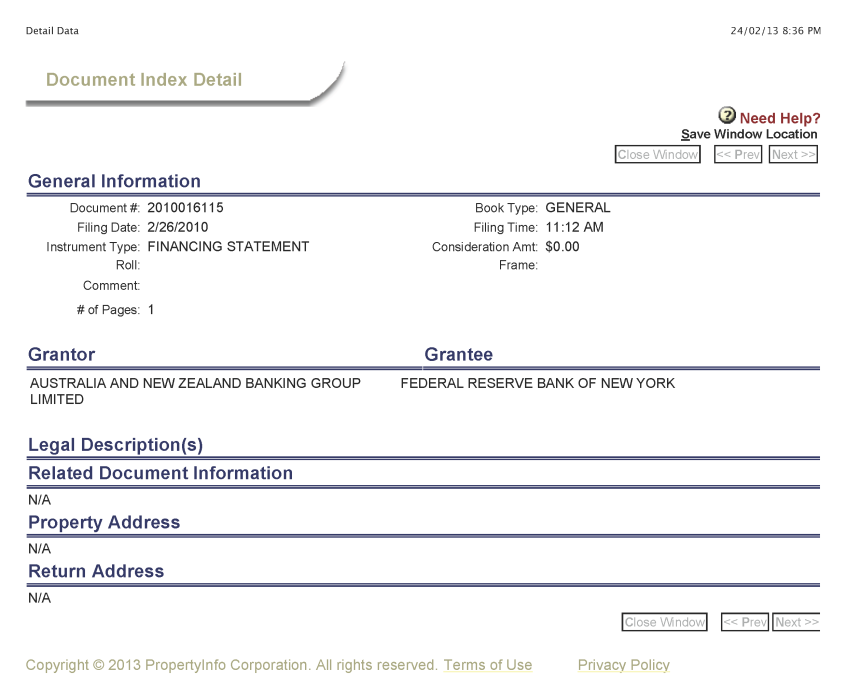 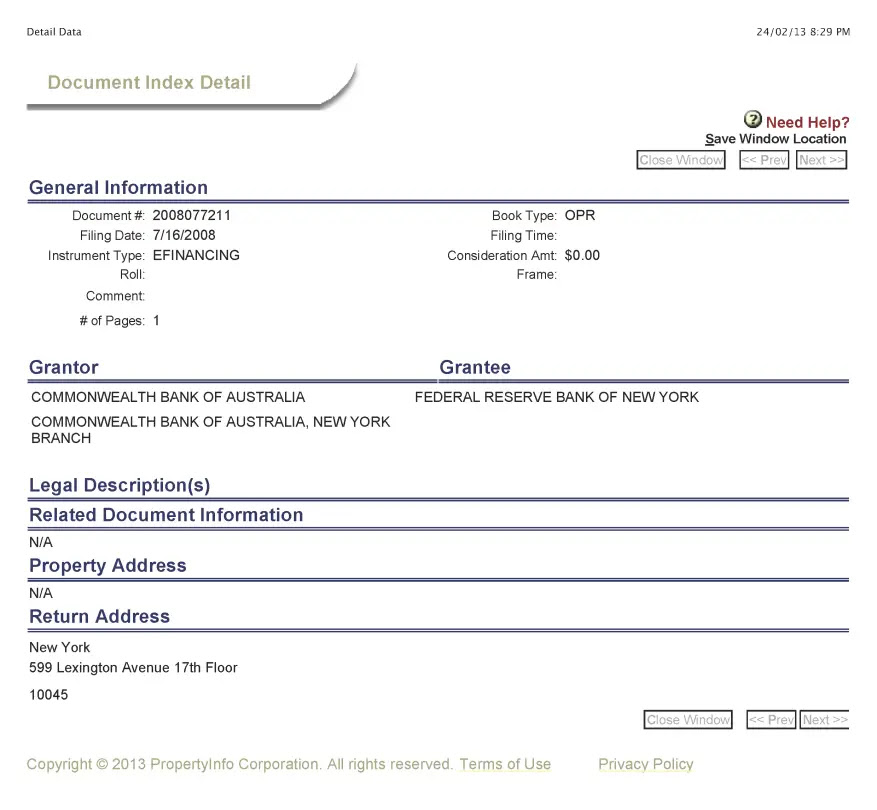 The Uniform Commercial Code is recognized as law by its international regulatory equivalents… many of which were modelled on the UCC. For example, the laws relating to Personal Properties and Securities in Canada, New Zealand and Australia were all directly modelled on Article 9 of the UCC.
Given the long-standing recognition offered to the UCC, the former governments of the world could not claim the UCC process against them invalid or irrelevant without (1) invalidating decades of their own commercial activity and (2) demonstrating that – as slaves – we were not entitled to apply the same rules to others that were consistently applied to us.
More importantly, the terms of the One People’s Public Trust restores our natural state of Being into law. The entity to which each Being on the planet is primarily accountable is now their Creator. That relationship is now lawfully ratified. And by definition, the Trust between you and the Creator is superior to any Trust that may be created or imposed by another Being or Beings… including the former Trust of government.
So… regardless of whether your government was corporatized or not, no Being can lawfully stand between you and your Creator. No Being may impose a system of control over you without your knowing consent. No Being can interfere with your experience of free-will, or of Creation itself.
Not now, not ever.
Therefore any government – corporatized or otherwise – that imposes controls on your Being is unlawful. And by extension, the corporations and banks that were facilitated by the Statutory Laws of those governments are also invalid. They were part of the same system of debt slavery. When government ceased to exist, so did its statutory constructs.
The global foreclosure of banks, corporations and governments therefore remains unrebuttable and stands with full lawful recognition in international law.
Over time, the One People will re-claim and reform the necessary functions of commerce. But until we do, just remember: our former masters have no lawful position of authority over us.
Know it. Feel it. Live it!
You now share a lawfully binding Trust with your Creator; one which forbids any interjection of another Being, not just as a rule – but because an unobstructed relationship between Being and Creator is the true nature of Creation.
Lawfully speaking, until your Creator – as a party to the Trust – arrives on Earth to make a specific claim on you, you are on your own recognisance to DO and BE as you choose, as a sovereign Being of equal standing.
And the CVAC (Creator’s Value Assest Centres) governance framework will assist us do to that.

“How can I be bonded to the One People’s Public Trust without my express consent?”

Any filing with the UCC that remains unrebutted stands as law. Claims made via the UCC – including the creation of Trusts – do not require expressed consent to validate them, they require rebuttal to invalidate them. UCC process requires that filings are publicly disclosed, and if left unrebutted, the filings become law.
It’s the same process used by (former) banks to foreclosure on mortgages; they made a claim of default which – left unrebutted – allowed them to seek the remedies of foreclosure and repossession against you.
Similarly, this series of filings made by the OPPT stand unrebutted. So the Trust is ratified and all Beings of the Creator are lawfully bonded to it. The only difference this time is that the rules were used to foreclose the system, not to protect the system.
That’s how the system works.
But please fear not! The terms of the One People’s Public Trust guarantee the protection of your free will in perpetuity. So let’s talk about free will.
The free and unimpeded will of every Being is explicitly protected by the terms of the OPPT. You even have the right to continue working for your former masters – provided you adhere to Universal and Common Law.
The difference now is that all corporate entities have been lawfully foreclosed and corporate debt erased. So if you choose to remain working for the slavery system, you will do it knowingly, willingly and consentingly, and as an individual – without the protection of personal indemnity previously granted under the system of corporate protocols. There is no structure or statute to hide behind. You are operating as a Being, in full liability of your own actions and creations.
It is therefore unlawful for you to impede the free will of another Being. It is unlawful for you to misrepresent yourself as a representative of a now-defunct entity, or to pursue another Being for a debt that has been lawfully dissolved. If you do, you should expect to be served a Courtesy Notice with the Terms and Conditions under which any future interactions with that Being may occur. If you continue to make false claims of authority or debt, you thereby demonstrate your acceptance of their Terms and activate a personal contract between you and that Being. And if their Terms include fees and charges for specific interactions initiated by you, you can expect to be invoiced for your behaviour accordingly. 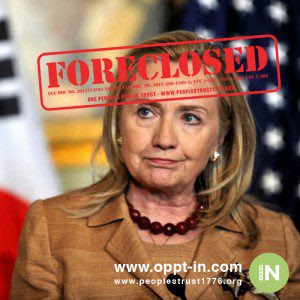 Welcome to the world of full personal liability!
By law, it is now every Being’s right to determine their own terms of engagement. You have the choice to accept those terms, or to not engage with them. It’s entirely up to you.
Free will is now your right, and protecting the free will of others is now your responsibility.
Under the OPPT, we each have the lawful means to preserve and protect our own free will. With that in mind, any Being who tries to cling to the old paradigm of debt, power, authority and control may find this transformation period very challenging indeed!

A lot of people say a lot of things on the internet.
As I noted in my previous article, UCC process is not taught in law schools. It is a knowledge that is deliberately confined to the top end of large corporations, and only the lawyers groomed in those corporations are given access to it.
OPPT Trustee Heather Tucci-Jarraf used to be one of them. She, and others who assisted her with the Paradigm Report investigations and structuring of the OPPT filings, have the requisite knowledge and experience to frame the filings in a way that turned a regulatory mechanism of the former commercial/slavery system back on its owners. And the result? The ‘True Bill’ UCC #2012114776 document (shown above) was successfully filed, which in UCC law is the equivalent of a criminal indictment including execution of sentencing.
(This filing can be obtained when you download all files from the www.peoplestrust1776.org).
Various “legal commentators” online are currently making proclamations about the OPPT filings based on an ‘outsider’ understanding of the UCC, presenting their opinions as facts, and concluding that the filings can’t possibly stand as law.
But opinions aren’t facts. And the fact remains: these filings were not able to be rebutted by any of the specialist lawyers from any of the world’s largest corporations; those who truly know how UCC works, and who stood to lose the most from those filings becoming law.
So if anyone genuinely intends to rebut the validity of the UCC filings, they are encouraged to enter…


“… a duly verified rebuttal of the DECLARATION OF FACTS UCC # 2012127914, point by point, with specificity and particularity, by duly sworn declaration, with their full responsibility and liability, under penalty of perjury under governing law, or any law so long as it is identified, and signed by their wet ink signature”

In the absence of a rebuttal, the UCC filings stand as law.


How can the Trustees suggest that everything will just be provided for us? Surely someone has to work?

Posted by Tetractys Merkaba at 11:40 PM