The authorised representatives have been able to speak with Dean directly.


Dean has been in court every day since his arrival to the Winnipeg Remand Centre since his kidnapping on Nov 24th.


He has not been allowed to speak at court hearings in which they have been scheduled right at the end of the day and with limited time.


After adjournment, he is escorted back to his cell.


There are departments that are integral to the judicial process which are refusing service and doing what they can to hinder the case.


During communications between Dean and authorised representatives, calls have been disconnected at crucial periods of the conversation.


Dean has been moved from solitary confinement to general public at the Remand Centre, and has been afforded writing materials. Court filings have begun.


In regards to the recent CBC article, 24th Nov in which they claimed


“Clifford was scheduled to appear in a Winnipeg court on Aug. 21, but didn’t show up. As a result, a warrant was issued for his arrest.”


According to the Manitoba Court website there is no record of any such schedule up to this date of this posting.


The last hearing was back in February 2013 on another matter in which that case had all 11 trumped up charges dropped and the case was Struck Off and closed.


There has been no other case recorded or pending after this event. 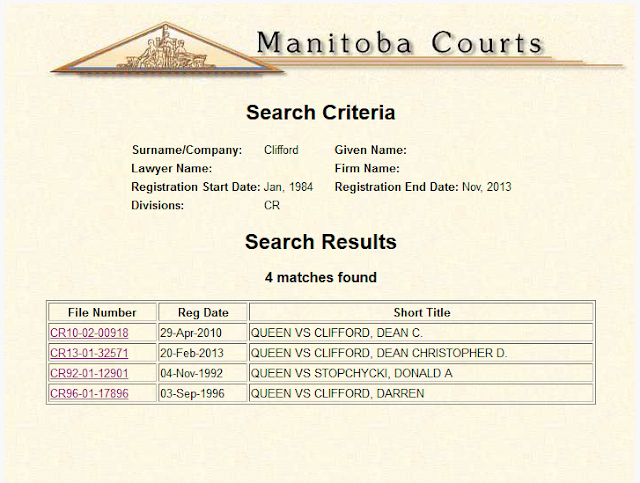 “They’ve thrown everything they have at me, and now it’s my turn to serve.”

Posted by Tetractys Merkaba at 12:04 AM